The Royal Palace of Madrid

A visit to the Royal Palace in Madrid was definitely on the wishlist of the
Allaboutroyalfamilies blog. Finally in March 2022 a dream came true.

The Royal Palace in Madrid didn't disappoint me, on contrary, due to its
splendid rooms full of royal history. 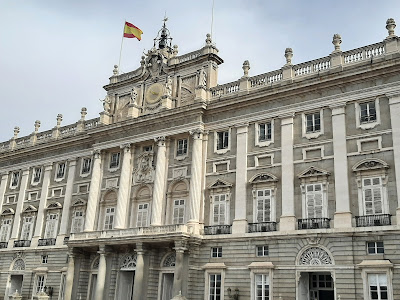 The palace was initially built by Muhammad I, Umayyad Emir of Cordoba,
between 860 and 880. After the Moors were driven out of Toledo in the
11th century, the castle retained its defensive function. Henry III of Castile
added several towers.
His son John II used it as a royal residence. During the War of the Castilian
Succession (1476) the troops of Joanna la Beltraneja were besieged in
the Alcázar, during which the building suffered severe damage.
Emperor Charles V, with the architects Alonso de Covarrubias and
Luis de Vega, extended and renovated the castle in 1537. Philip II
made Madrid his capital in 1561 and continued the renovations,
with new additions. Philip III and Philip IV added a long southern
facade between 1610 and 1636. 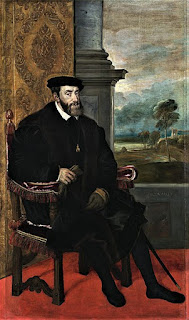 Charles V
Source picture: Wikipedia
Philip V of Bourbon renovated the royal apartments in 1700.
The Alcázar of the Habsburgs was austere in comparison to
the Palace of Versailles where the new king had spent his childhood;
and he began a series of redesigns mainly planned by Teodoro
Ardemans and René Carlier, with the main rooms being redecorated by
Queen Maria Luisa of Savoy and the Princess of Ursins in
the style of French palaces.
On Christmas Eve 1734, the Alcázar was destroyed by a fire that
originated in the rooms of the French painter Jean Ranc. Response
to the fire was delayed due to the warning bells being confused
with the call to mass. For fear of looting, the doors of the building
remained closed, hampering rescue efforts. Many works of art were
lost, such as the Expulsion of the Moors, by Diego Velázquez. This
fire lasted four days and completely destroyed the old Alcázar,
whose remaining walls were finally demolished in 1738.
Italian architect Filippo Juvarra oversaw work on the new palace
and devised a lavish project of enormous proportions inspired
by Bernini's plans for the Louvre. This plan was not realized, due
to Juvarra's untimely death in March 1736.
His disciple Giambattista Sacchetti, was chosen to continue the
work of his mentor. Sacchetti designed the structure to encompass
a large square courtyard and resolved sightline problems by
creating projecting wings.
In 1760, Charles III called upon Sicilian Francesco Sabatini, a
Neoclassical architect, to enlarge the building.
In the 19th century, Ferdinand VII, who spent many years
imprisoned in the Château de Valençay, began the most
thorough renovation of the palace. The aim of this redesign
was to turn the old-fashioned Italian-style building into a
modern French-style palace.
However, his grandson Alfonso XII proposed to turn the
palace into a Victorian-style residence. Alfonso's plans were
designed by the architect José Segundo de Lema and consisted
of remodeling several rooms, replacing marble floors with parquet,
and adding period furniture. 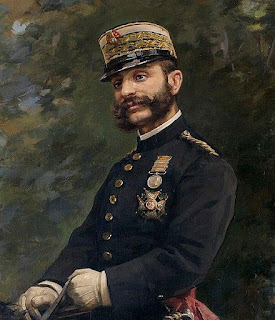 Alfonso XII of Spain
Source picture: Wikipedia
In the twentieth century, restoration work was needed to repair
damage suffered during the Spanish Civil War, by repairing or
reinstalling decoration and decorative trim and replacing
damaged walls with faithful reproductions of the originals. 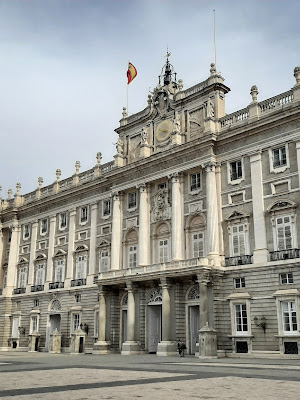 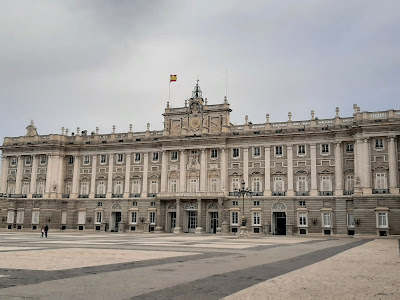 The main facade of the Palace, the one facing the Plaza de la Armeria,
consists of a two-story rusticated stone base, from which rise Ionic
columns on Tuscan pilasters framing the windows of the three
main floors. The upper story is hidden behind a cornice which
encircles the building and is capped with a large balustrade. This was
adorned with a series of statues of saints and kings, but these
were relocated elsewhere under the reign of Charles III to
give the building a more classical appearance.
The restoration of the facade in 1973, which includes Sabitini's
balcony of four Doric columns, returned some of Sachetti's sculptures. 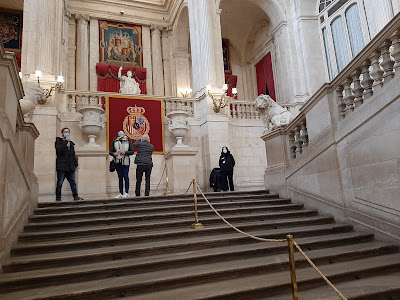 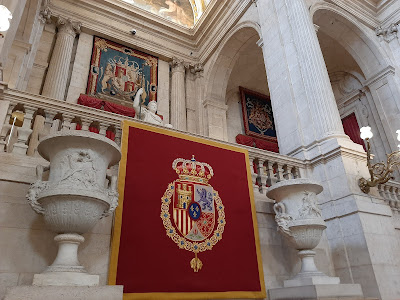 The Royal Palace of Madrid is the official residence of the Spanish
royal family at the city of Madrid, although now used only for state
ceremonies.
The palace has 135,000 m2 (1,450,000 sq ft) of floor space and
contains 3,418 rooms.
👉 It is the largest functioning royal palace and the largest by
floor area in Europe.
The palace is now open to the public, except during state functions,
although it is so large that only a selection of rooms are on the visitor
route at any one time, the route being changed every few months.
The wedding banquet of Prince Felipe and Letizia Ortiz took place
on 22 May 2004 in the central courtyard of the palace. 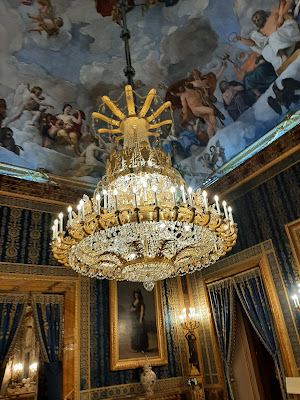 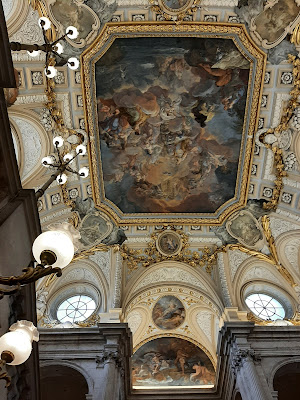 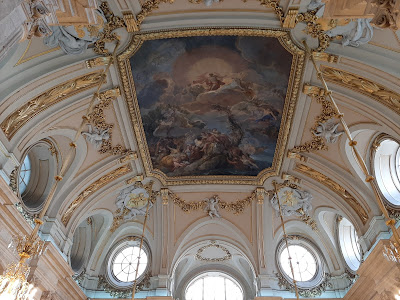 Notes from the author

Although it is a magnificent royal palace, with a wonderful
history it was a little strange for me to see tapestries of Brussels
in Madrid.
This was a tangible thing that the Habsburgs once ruled in
Belgium (then the Southern Netherlands).
👉 Interested in the Spanish Royal History? Check the page
The royal history of Spain on top of this blog or on this link.
Interested in more (royal) palaces in Madrid? Check the post
about the Palacio de Zurbano - The Birth Place of Queen Fabiola
of Belgium on this link.
Pictures of the Royal Palace of Madrid, taken in 2022
Geen opmerkingen:
Dit e-mailen Dit bloggen!Delen op TwitterDelen op FacebookDelen op Pinterest

She was baptized in Cannes, in the church of Rins, with the name
of María del Pilar Alfonsa Juana Victoria Luisa Ignacia de Todos
los Santos de Borbón y Borbón.
Her godparents were her paternal grandfather, King Alfonso XIII and
her maternal grandmother the Princess Louise of Orléans, although
Alfonso XIII acted by delegation as he did not want to meet his
wife Queen Victoria Eugenia.
From her birth, as the daughter of the heir to the Crown of Spain she
was given the title of Infanta of Spain with treatment of Royal Highness.
However, the official recognition of that title came when her brother
was already King of Spain.

When she was an infant, the family moved to Rome where the Spanish
Royal Family settled in exile. In 1941, after the resignation of Alfonso XIII,
her father became the holder of the dynastic rights of the Spanish Crown in exile.
During World War II she lived at Lausanne in Switzerland, where her
grandmother, Queen Victoria Eugenia, lived. In 1946 the family resettled
at Estoril in Portugal.
At the wedding of her brother Juan Carlos I of Spain with Princess
Sofía of Greece, in 1962, she was one of eight bridesmaids.

The search for a suitable man

Her family attempted to marry her to Baudouin of Belgium, who ended up
marrying Fabiola de Mora instead.

Pilar de Borbón had been supporting international equestrian sport.
She was President of the International Equestrian Federation from 1994 to
2006, succeeded by HRH Princess Haya bint al Hussein.
She wrote the foreword of the official Spanish translation of the national
instruction handbook of the German National Equestrian Federation,
Técnicas Avanzadas de Equitación - Manual Oficial de Instrucción de
la Federación Ecuestre Alemana.
From 1996 to 2006 she was a member of the International Olympic
Committee for Spain, when she became an honorary member, and
Member of the Executive Board of the Spanish Olympic Committee.

Pilar de Borbón was one of the founders of Asociación Nuevo Futuro
("New Future Association") in 1968, an international child support
organization, and was its president and then president of honor.
Until her death, she was one of the leaders and supporters of the
Rastrillo Nuevo Futuro event, which provided part of the income
that financed Asociación.
👉The event even received the visit of the Queens of Spain, Letzia and
Sofia. Rastrillo has always been a place of meeting, solidarity and
enjoyment for her, wrote ¡Hola! magazine in January 2019.
Her last public appearance was in "Rastrillo" on 23 November 2019.
Pilar de Borbón was also a member of the board of directors of the
Queen Sofía Spanish Institute in New York City, president of the
World Monuments Fund España and, from 2007 to 2009,
president of Europa Nostra, the European Federation for the
Defense of Cultural Heritage.
She was also a music fan and accompanied her brother, King
Juan Carlos of Spain, and nephews to bullfighting matches. 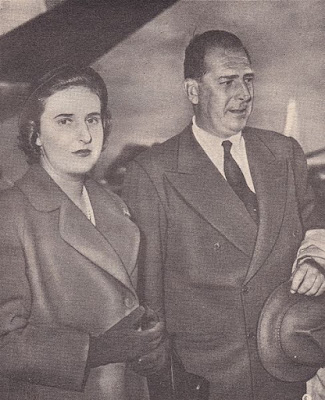 Pilar was operated for an intestinal obstruction on 2 February 2019
in Madrid, and was diagnosed with colon cancer in 2019, being made
public in May of the same year.
On 5 January 2020, she was admitted to the hospital as her condition
worsened. She died 3 days later on 8 January 2020 at the Ruber
International Hospital in Madrid, with her family at her side.
She was cremated on 9 January 2020 and her ashes were buried
alongside her husband in Saint Isidore Cemetery, Madrid, in a
private ceremony.
On 28 January 2020, a funeral was held in her honor in El Escorial basilica,
with the presence of her nephew, King Felipe VI of Spain, of former
Queen of the Netherlands, Princess Beatrix, her brother
Juan Carlos I and Sofía of Spain, the Duke of Braganza Duarte Pio
and with Spanish political authorities represented by Deputy
Prime Minister Carmen Calvo, Mayor of Madrid José Luis
Martínez-Almeida and President of the Congress of Deputies Meritxell
Batet.
Source pictures: Wikipedia
Geen opmerkingen:
Dit e-mailen Dit bloggen!Delen op TwitterDelen op FacebookDelen op Pinterest
Oudere posts Homepage
Abonneren op: Posts (Atom)

Search in this blog 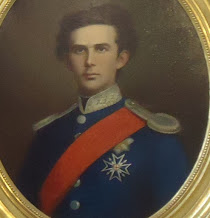