Faisal I bin Hussein bin Ali al-Hashimi was born on May 20th. 1885 in Mecca,
then a part of the Ottoman Empire. 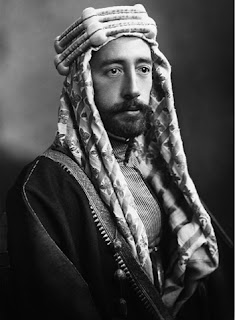 His parents were Hussein bin Ali, Sharif of Mecca and Abdiyah bint Abdullah.
Faisal I was a member of the Hashemite dynasty.

Faisal I learned a lot of leadership from his father and in 1913 he was elected as
representative for the city of Jeddah for the Ottoman parliament. 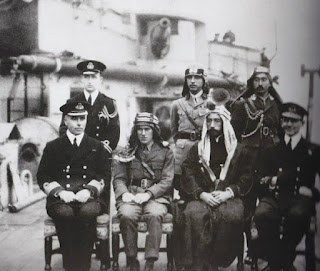 On October 23rd. 1916, Faisal I met Captain T.E. Lawrence, better known as
Lawrence of Arabia. This captain wanted a large post-war Arabian state and
he was looking for the right man to lead the Arab forces to achieve this aim.

Between 1916-1918 Faisal led the army of rebellion and he confronted the
Turks in what's now Saudi Arabia, Jordan and Syria.

Faisal also worked together with the Allies during World War I. and with the
capture of Damascus. Faisal's role in the Arab revolution was written in the
Seven Pillars of Wisdom, a book by T.E. Lawrence.


After World War I

In 1919 Faisal led the Arab delegation at the Peace Conference in Paris.

On March 7th. 1920 Faisal was proclaimed King of the Arab Kingdom of Syria.
However on July 24th. 1920 the Battle of Maysalun took place and the French
achieved a victory. So, Faisal was expelled from Syria. He went to live in the
United Kingdom.

In March 1921 the Cairo Conference took place and Faisal was a good
candidate for ruling the British Mandate of Iraq. He became King of Iraq from
1921 till 1933.

On September 8th. 1933, Faisal I died of an heart attack while he stayed in
Bern, Switzerland.This caused a lot of speculations. Faisal was buried at the
Royal Mausoleum in Baghdad, Iraq.