Leonid Kulikovsky was the great-grandson of Grand Duchess
Olga Alexandrovna of Russia. 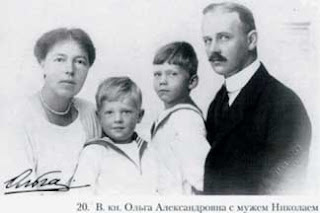 Grand Duchess Olga and her family in 1922

On August 9th. 1901 Grand Duchess Olga Alexandrovna, then 19 years old,
married the 33 years old Duke Peter Alexandrovich of Oldenburg. However
in 1916 their marriage was annulled.

On November 16th. 1916 she married Nikolai Kulikovsky. After the revolution
the couple was summoned by the dowager Empress to Denmark. Later they
moved to Canada.

If you want to read the full article, check the telegraph on this link.
Here is a link to ABC net about his funeral.