Royals, rock stars, tycoons and artists, all of them, like to have a special or

a beautiful interior of their homes.

Many times they end up by Axel Vervoordt, a Belgian collector, antiquarian,
interior designer and curator.

Axel Vervoordt was born in 1947 in Antwerp. His father was active in the
international horse trade and his mother was a good friend with artists.

In 1960, Axel Vervoordt started to renovate houses in Antwerp. This became
an important part of the group Vervoordt: the purchase of houses, renovate
them and even upgrade them.

One of his most famous projects is the renovation of the Vlaeykensgang,
a small street in Antwerp from the 16th. century (see pictures).

At the age of 14 he traveled for the first time to England, to collect special
objects of art. This also became one of his main activities.

In the early 1970's Axel traveled to Thailand, Cambodia and Japan.
The Buddhist art inspired him.

In 1982 Axel Vervoordt became internationally known during his
debut at the Biennale des Antiquaires in Paris.

In 1986, he bought the Castle of 's Gravenwezel. This was neglected and
it lasted for almost 4 years to renovate it. 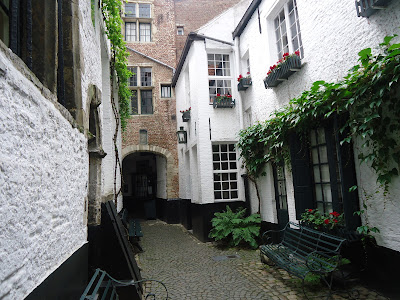 Nowadays, Axel Vervoordt is a Royal Warrant holder of the Belgian
court.