Royal Destinations in the past - Ribeira Palace in Lisbon, Portugal

The main residence of the Kings of Portugal in Lisbon for around 250 years
was the Ribeira Palace. 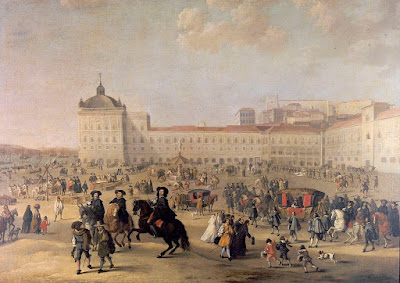 Before 1147 (The Siege of Lisbon), the Portuguese monarchs always had
used the Castle of São Jorge as their residence in Lisbon.

King Manuel I of Portugal set off on a building spree, renovating the
Lisbon landscape and starting with the construction of a brand new
Royal Palace.

This new palace wasn't located on a high, easily protected fortress hill,
it was built on the river shore of the Tagus river. That's why the new
palace received the name: Ribeira Palace.

A special Thank You for João Rita, who read one of my previous posts
about Portugal very well and who gave this explanation too.

Soon, Lisbon became one of the most important cities and ports in all
Europe. The city had a lot of spice trade and from Lisbon many explorers
left Europe for the wide world. 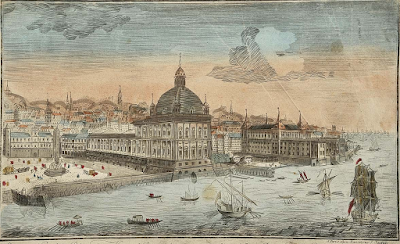 The Ribeira palace was a true royal residence built in the Portuguese
Renaissance style. It was called the Manueline style.

In 1525, King John III sponsored a set of enlargements and
renovations to the palace.

In 1580, the House of Habsburg seized the throne. The newly King,
Philip I of Portugal started a large series of constructions and renovations
throughout Portugal.

This king also ordered the remodeling and expansion of the
Ribeira Palace under the authority of Filipe Terço.

King Joseph I, built a Royal Opera House by the palace, designed
by the Italian Giuseppe Bibiena.

The opera was inaugurated in 1755.

The loss of a palace

On 1 November 1755, a huge earthquake and resulting tsunami
and a fire destroyed the palace and most of Lisbon.

The 70,000 volume royal library which was housed in the
Ribeira palace was lost as well as hundred works of art.

The Prime Minister, 1st. Marquess of Pombal, coordinated
massive reconstruction effort. However the Royal family
abandoned the Ribeira area and moved to palaces in the
areas of Ajuda and Belém.

Today Lisbon's primary square the Praça do Comércio is
situated on the site of the former palace.