Was Klemens (von) Metternich a real spider or just a
splendid diplomatic?

Franz George Carl Count Metternich-Winneburg zu Bilstein and
Countess Maria Beatrice Aloysia von Kageneck. He was named in
honour of Prince Clemens Wenceslaus of Saxony, the archbishop of
Trier and the former employer of his father. 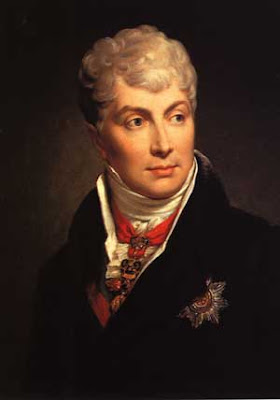 His education was handled by his mother , influenced by their
proximity to France. Metternich spoke French better than German.

In 1788, Metternich started to study law at the University of Strasbourg.
During his studies he met Prince Maximilian of Zweibrücken (who
became later King of Bavaria).

At the end of 1790 till the summer of 1792, Metternich studied law
at the University of Mainz. This was a more conservative education than
at Strassbourg.

In March 1792, Francis II succeeded as Holy Roman Emperor, he was
crowned in July. Meanwhile France had declared war on Austria,
(the War of the First Coalition). This made Metternich's further study in
Mainz impossible. He was sent on a special mission to the front. Here he
led the interrogation of the French Minister of War, the Marquis de
Beurnonville. 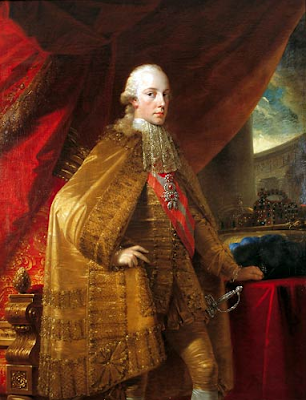 On 27 September 1795 Klemens Metternich married to Countess Eleonore
von Kaunitz, a granddaughter of the former Austrian chancellor Wenzel
Kaunitz. This marriage was arranged by Metternich's mother to introduce
him in the Viennese Society.

After Metternich's studies in Vienna, he participated in the
Congress of Rastatt in 1797.

After the defeat of the Holy Roman Empire in the War of the Second
Coalition, Metternich was offered a choice between three ministerial
positions:

- Imperial Diet at Regensburg;
- Kingdom of Denmark at Copenhagen;
- Elector of Saxony in Dresden.

In 1801 he chose Dresden in Late January.   Metternich took up
a Mistress: Catherine Bagration, who bore him a daughter:
Marie-Clementine.

Later Metternich became ambassador to the Kingdom of Prussia.
This took place in November 1803. He was worried about the
territorial ambitions of Napoleon Bonaparte, the leader of  France.
His worries were shared with Tsar Alexander I of Russia.
The Tsar kept Metternich informed about  the Russian policy. 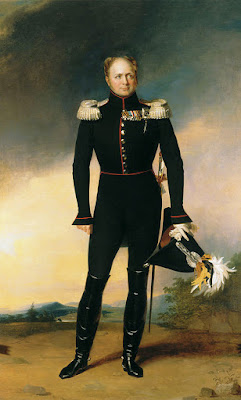 Tsar Alexander I of Russia


Metternich even argued with Napoleon Bonaparte on his 39th. birthday
celebrations in August 1808 about the preparations for war on both sides.
Afterwards Napoleon refused Metternich's attendance at the Congress of
Erfurt. 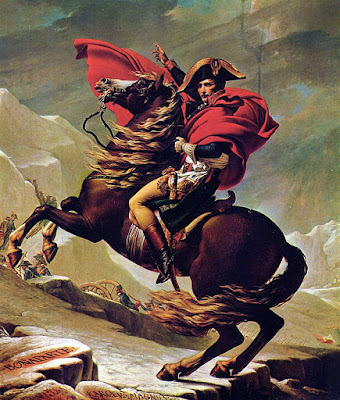 In 1809, Metternich witnessed first hand the Austrian defeat at the
Battle of Wagram. Metternich had to push for the marriage of Napoleon
to Archduchess Marie Louise. The couple were married by proxy on
11 March 1810. Marie Louise left for France soon and Metternich
followed via a different route and unofficially.

In October 1810 Metternich returned to Vienna, he was no longer popular.
But he still tried to make alliances between countries.

In May 1812, Metternich accompanied his sovereign for a final meeting
with Napoleon at Dresden, before Napoleon embarked upon the
French Invasion of Russia.

At that time, Austria's influence in Europe had reached its lowest level.
The next months Metternich distanced Austria from
the French. He also avoided an alliance with either Prussia or Russia.

In October 1813, Klemens Metternich was given the title Prince for his
service to the Austrian Empire.

Later Metternich went to Bohemia, where he benefitted from the hospitality
of the beautiful Princess Wilhelmina, Duchess of Sagan. He started an affair
with her which lasted several months. She had a great influence over
Metternich. 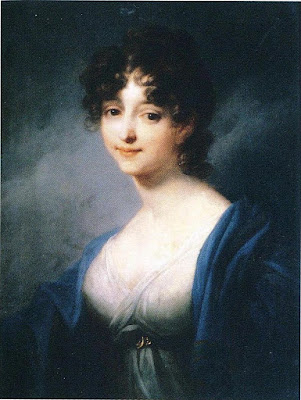 On 18 October 1813, the Battle of Leipzig took place and Napoleon was
defeated by the allies.

In the autumn of 1814, the heads of 5 reigning (Britain, Prussia, Austria and
Russia) dynasties and their representatives started to gathering at Vienna.
Metternich played an important role at what was called the Congress of
Vienna.

On 7 March 1815, Metternich was awakened with the news that Napoleon
escaped from Elba. Within an hour he had met with both the Tsar and the
King of Prussia.

On 3 May 1815, Austria won the Battle of Tolentino and captured Naples,
less than three weeks later.

Napoleon was finally defeated on the Battle of Waterloo which took place
on 18 June 1815. Metternich was soon back with the allies in Paris to
discuss peace terms. The Treaty of Paris was concluded on 20 November.

In December 1815, Metternich traveled to Italy, he visited Venice and
Milan, to study the situation there.

In June 1817, Metternich was required to escort the emperor's newly wed
daughter Maria Leopoldina to a ship at Livorno. After their arrival,
Metternich spent some time in Italy. He visited Venice, Padua, Ferrara,
Pisa, Florence and Lucca. He returned to Vienna on 12 September 1817.
Three days later, his daughter Maria married to Count Joseph Esterházy.

In 1821, Metternich met King George IV of the United Kingdom and
the Viscount Castlereagh in Hanover in October. He promised to settle
in part Austria's financial debts to Britain.

On 19 March 1825, his wife Eleonore died in Paris, France.  While
mourning, Metternich took up the opportunity to dine with the Paris
Elite. He left Paris for the last time on 21 April 1825. 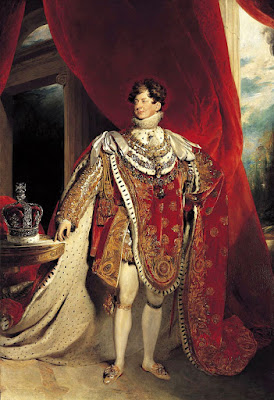 On 5 November 1827, Metternich married to Baroness Antoinette
von Leykam. She was only twenty years old and she belonged to the
lower nobility. But due to her charm and her grace she soon won over
the Viennese society.

In January 1829, Antoinette died shortly after giving birth to their son
Richard von Metternich. Another son Victor, died due to tuberculosis
on 30 November 1829. 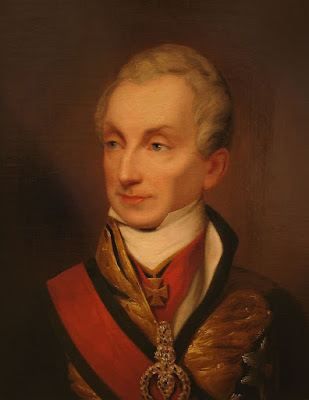 In 1830 Metternich was worried about the news of the unrest in
Brussels (then a part of the Netherlands).

In February 1831, rebels took the cities of Parma, Modena and
Bologna and appealed to France for help.

In 1831, Egypt invaded the Ottoman Empire. There were fears of the
Empire's global collapse. Metternich therefore proposed support for the
Ottomans and a Viennese congress to sort out the details. This was
opposed by France and by the United Kingdom.

On 2 March 1835, Emperor Francis died and he was succeeded by
his son Ferdinand I. Metternich soon accompanied Ferdinand on his
first meeting with Tsar Nicholas and the King of Prussia at Teplitz,
it was an untroubled meeting.

Metternich had long predicted the new crisis in the East when the
Second Turko-Egyptian war broke out in 1839. Metternich tried
to negotiate between the former allies with no or less result. He
became ill.  Nevertheless he still tried to do his diplomatic duties
in Europe and even in the world.

In 1848 revolutions broke out in Europe, and Metternich predicted
already troubles in Italy. After an anxious journey, Metternich
traveled to Arnhem, Amsterdam and The Hague. On 20 April 1848,
he and his family landed at Blackwall and London, where they
stayed at the Brunswick Hotel in Hanover Square until they found
a permanent residence.

Metternich enjoyed his time in London, he met the Duke of
Wellington (almost 80 years old at that time), Palmerston, Guizot and
Benjamin Disraeli. However Queen Victoria did not acknowledge
his presence in the capital. 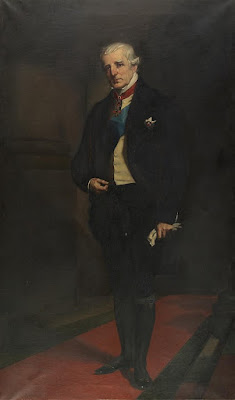 In October, the Metternich family moved to Brussels. In this city the
living coasts were cheaper and it was closer to the continental
affairs.

In May 1851, Metternich left for his Johannisberg Estate.
That summer Metternich enjoyed the company of Prussian
representative Otto von Bismarck. He also enjoyed a visit from King
Frederick William of Prussia.

In September 1851, Metternich returned to Vienna. There he had no longer
an official function but Emperor Franz-Joseph asked him for his advice
on numerous issues. Even Tsar Nicholas called on him during a state visit.
King Leopold of the Belgians came to visit him, as did Bismarck and on
16 August 1857 he entertained the future Edward VII of The United Kingdom.

On 11 June 1859, at the age of 86, Metternich died in Vienna.
He was the last great figure of his generation. Almost everyone of
note in Vienna came to pay tribute. In the foreign press his death went
unnoticed ...

I think the 18th. and 19th century were splendid eras for diplomats
and courtiers. I would love to have Metternich's address book.


Metternich was mentioned in The Comunist Manifesto, written by
Karl Marx and Friedrich Engels, as one of the forces trying to curb
the communism.

Of course there are books about Klemens Metternich. I read this one 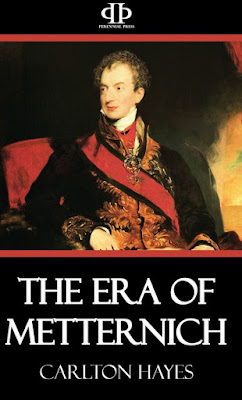 If you have other book hints, please let me know!

@EmpressofHAB gave me on Twitter the Hint of the book The
Grandma. It's about Wilhelmine. More on this link.